The 90s: Queer Nation and the Lesbian Avengers

Queer Nation
In 1990 ACT UP activists teamed up to form the group Queer Nation. Queer Nation was a radical group of gay activists who held an anti-heterosexual agenda, increased GLBTQ visibility, and attempted to combat homophobia. At the time queer was still considered an offensive word, thus Queer Nation took it back by declaring it to themselves proudly. The organization spread all over the country within days. 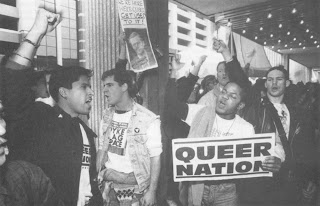 Queer Nation immediately proved itself more aggressive and controversial than the in-your-face tactics of ACT UP. The following are just a few of the many protests organized by the group:
-On top of the usage of media zaps, Queer Nation unveiled a forty-foot banner on the roof of a Greenwich Village bar reading, "Dykes and Fags Bash Back!"
-The New York branch put together a New Orleans-style funeral procession outside of the Waldorf-Astoria hotel to protest an appearance by President Bush.
- Phone Zaps were held in Los Angeles in an attempt to overload the phone lines of anti-gay politicians
- In 1991 Queer Nation held protests after Governor Pete Wilson vetoed gay civil-rights legislation
One of the most controversial tactics used by Queer Nation was the "outing" of public figures who kept their sexual identity a secret. Supporters of Queer Nation argued that in order for homosexuals to be taken seriously, their presence needs to be noted. One particular "outing" that raised controversy was that of the multimillionaire Malcolm Forbes after his death. Similarly, Oliver "Bill" Sipple, a Vietnam veteran, was outed through newspaper. This revealed his sexual identity to everyone including the public. Sipple fell into a deep depression and thus was rejected by his family, became an alcoholic, and gained a large amount of weight. Sipple's body was later found in his apartment two weeks after he had died. Journalist Signorile however maintained that it was necessary to "out" public figures. In 1991 he publicly "outed"
Lesbian Avengers
In 1992 Queer Nation began to die down because of internal arguments. In its wake many groups were formed, one of them being the Lesbian Avengers. The Lesban Avengers goal was to increase lesbian visibility, and did so by working with other queer groups. In 1992 the Lesbian Avengers came to the call when a New York City school board rejected a multicultural curriculum that included discussion of homosexuality. The Lesbian Avengers responded by passing out balloons to kids in an Irish Catholic community stating "ASK ABOUT LESBIAN LIVES." Another protest involved the Promise Keepers-- a Christian men's group that fought for traditional gender roles. In 1997 the Avengers attended the Promise Keeper's conference topless. Avengers also distributed parking tickets on cars near the Keepers gathering that stated "illegally parked in a hate free zone." 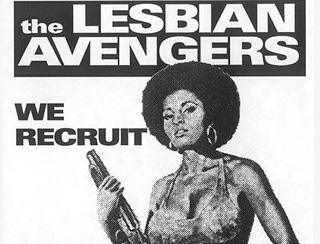